Picture from Saint Louis is now a couple of months old. We just got back from Albuquerque, where Andy and Catherine and the girls, and Lulu's godfather Ed Keating visited us to celebrate Andrew's birthday weekend at a birthday dinner with the Bracketts and the Johnsons at Casa Griffin. We are sorry we were unable to alert everyone to Tim's latest appearance (on 24) here is his email to the family telling us about the show, which aired around the equinox:


Hey everybody, Just a heads up for anyone who cares, tomorrow night (Monday March 21st) is my swan song as Agent Baron on "24." As you may have figured out from last weeks trailer, things are (once again) going to go horribly wrong for Keifer and the rest of us "good guys" fighting those nasty terrorists. Be warned, some intense stuff that may not be cool for the young-uns. (I promise to do a sit-com next) However, for the rest of you who enjoy seeing your friend/relative/barely-know-the-guy suffer extreme misfortune, by all means...enjoy! Thanks again for watching! (or if you will not be tuning in because you simply cannot bear to miss another riveting "Dateline with Stone Phillips," then...I pity you) East and West Coast starts at 9:00pm. Chicago's show starts at 8:00pm. Either way check your local listings because I am totally unreliable as a TV Guide. Hope everyone is having a super 2005! Much Love, Tim
- posted by Letter @ 2:39 PM 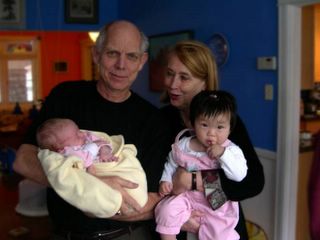 Poppa and Momo with Lulu and Meg

Today is Andy's birthday. We drove down to St. Louis last weekend to meet Margaret Clare Griffin (Meg) and celebrate a week early with Catherine's fabulous cake. Lulu (Louise Catherine Griffin) had a great time at her swimming class with her Dad and Poppa. Catherine got to take her first walk while Momo stayed with Meg. Before we left we had a lovely walk at the Saint Louis Botanical Garden one of our favorite places to visit.

Last night Tim was on NBC's Medical Investigation. The episode was called Mousetrap for all of you who have Tivo and want to see it when it next airs. Coming up a guest lead on 24, we think it's the 13th episode. Here is his email to family:

Aidan and India Griffin College Fund Update
Hey Everybody! First, big thanks to all of who went to see "Bourne Supremacy" and/or bought the DVD. Because of the film's success, I have informed Aidan and India that they can expand their choices to include now both Junior AND Community Colleges! (We'll look into four year Universities after they sell the network rights). For any who want to see me catch the plague (yes, the plague), tune into NBC Friday, February 4th at 10p.m. (9 central) on "Medical Investigation." It's some pretty gruesome and intense stuff, so maybe shelter the kiddies. I won't give anything away, but the episode is called "mousetrap." Surprise ending. Try to solve the mystery. Also, some of you may have heard that I just finished filming "24" on Fox. It is a great show that will really hook you. This season is particularly intense. Lots of fun to shoot. Should air sometime in March. I'll keep you all posted. Happy 2005 from Tim, Alicia, Aidan and India!!! P.S. Congrats to all the new parents in the family!!! (Including big brother Andy!) P.P.S. Website with family pics to follow soon!

Thanks to all the friend's who remembered my birthday last week. I share the date with Noel Coward, Margaret Mead, Beethoven, Arthur Clarke.

This year we will be driving to St. Louis to celebrate Christmas Eve and Christmas Day with Andy, Catherine and Lulu.

Hopefully we'll get out to LA to celebrate the Chinese New Year again with Tim and Alicia and Aidan. We hope to get the Halloween photos of India as a pumpkin and Aidan as Harry Potter up on one of the fotologs soon.

Tim will be filming (a TV show) in the first weeks of January 05. For his children's college funds, he's asking that everyone buy a DVD of the Bourne Supremacy. (Yes, on the DVD if you go to the Director's comments part and watch his scene with Damon and phone conversation with Joan Allen you don't have to watch the entire scene. )Although we enjoyed seeing it immensely. We saw it with our friend Beverly Croydon who drove down from Santa Fe to see the little boy she used to know in Lake Forest turn into a CIA agent in a wink of an eye.

Louise Catherine Griffin has arrived! She's a beautiful child. Andy and Catherine refer to her alternatively as The Empress and Lulu. Andrew and I visited over Halloween weekend in St. Louis. We go back this month on the 21st for her baptism. Tim and Alicia and Aidan and India will be joining us as Alicia will be Lulu's godmother. Then the St. Louis Griffins come up to the
Dunes for Thanksgiving at Tim and Suzys with all the Chicago area Griffins. They'll stay through the first week in December with us as Catherine's sister Mary Claire's son Gavin, born in October will be baptised in Chicago on the first Saturday in December. We'll be down in St. Louis for Christmas as Catherine and Andy's baby daughter is due the second week in January so they won't be traveling after the Thanksgiving week visit.

Tim and Alicia and their kids visited us in Albuquerque for balloonfest. It was lots of fun and we enjoyed having them see Casa Griffin for the first time. Hopefully we'll post a few pictures soon. we'd like to include their Halloween shots. The West coast Griffins hosted a successful Halloween party. India went as a pumpkin and Aidan as Harry Potter. Tim usually sends us wonderful photos via his cell phone! They visited with us in Chicago for the Patel/Layland wedding over the July 4th weekend.Andy and Catherine came up as well for one of the most beautiful weddings we have seen (the bridegroom came on an elephant,the bride was indeed a princess bride, the wedding was on a boat, the wedding brunch was on Lake Michigan and the evening reception was at the Planetarium. And that was only half of the parties! (a henna party, another dinner dance and a bar-b-que in Grant Park) All the grandchildren were welcome so it was a very special few days together.

Andrew is traveling a lot this November. He just came back from a visit with his brother Peter to the Griff-Driscoll spreads in Texas stopping for a couple of nights in Albuquerque. He leave this week for a reunion in Jacksonville with about ll of his Notre Dame friends. In December
we'll both travel back to Albuquerque where I'll celebrate my birthday a week early.

It's been some months since I have been back to summer country. However, since it's summer I will post the two latest items of news from our family. First our second born son (Tim) and The Bourne and his small but viable role in Universal movieThe Bourne Supremacy with Matt Damen. He plays the role of CIA agent, John Nevins. Here are Tim and Alicia walking the red carpet at the premiere in Hollywood, a benefit for the University of California Film school-It's taken from hollywood.com. Since these links change often, maybe it will still be up, maybe it won't!

Anyway if you see it, watch for his name in credits and cheer! And buy the DVD when it comes out, a shameless promotion for their children's college fund!

And in the Great Good Fortune Continued department. Andy and his wife Catherine have just been informed that their adoption from China has come through and they will be traveling to China in the next few weeks to pick up thier daughter Louise Catherine Griffin (her nickname will be Lulu which is in China is a lucky name and means double dewdrop). She was born August 22, 2003.

Details on other summer activities, our most recent trips to Albuquerque and the wonderful weddings we have been attending will follow when I figure out how to post pictures to this blog. India and Aidan came in with Tim and Alicia as well as Andy and Catherine over the fourth of July weekend for the Patel wedding.
A five day celebration of events, the wedding day on the fourth of July was memorable and right out of Princess Bride. The bridegroom Michal arrived at the ceremony on a camel, the Indian wedding was on a boat the Odyssey as was the lunch that followed the ceremony and the evening reception was held at the Planetarium.(Ashlesha our Princess bride carried by her kindsmen in a canopied litter was named at birth after a big time constellation!) When Andy and Catherine come back up in August for Catherine's parents 40th anniversary party and our anniversary weekend (as well as Lulu's second birthday!) we will hopefully be able to post more current photos as he is the Griffin with the meticulous photo filing habits. Lulu's baptism will be in Saint Louis on November 21st. We'll have an early Thanksgiving dinner with the Griffins and the Keatings (Alicia is going to be Lulu's godmother and Catherine's brother Ed, will be her Godfather)

To end this post in true synchornicity. I feel I should add that my godfather was William Casey, former Directory Central Intelligence agency. I don't think he'd like to see our son playing a CIA agent being bested by Matt Damon (Jason Bourne) but I think he'd applaud the fact that Lulu was named for my mother Louise Collins who died just before my third birthday. My father Peter Collins who died three months after my birth, worked for William Casey William Casey wrote me a wonderful letter about my father. I am still of course looking for it in my personal files.www.avalonarchives.com. As soon as I find that letter and also a charming letter where he once wrote "Dear Moira, thank you so much for telling me about your rabbit hatch". You can see that I was writing letters, even when I was young......................................... well of course I own the domain www.letterwriting.com!

**as Barbara Kingsolver notes in her fbook Last Stand American Virgin Lands
wrote: It is difficult for the human enterprise to stand back from it's urgent agenda and see how the economy of the moment undercuts the economy of eternity"

This is a wonderful summation and summary of many of the books I
have been reading as well as explaining in great detail much of the
realities of our actual time in the Galapagos and what we saw on the
islands, although we were in a smaller group.

Great books on the Galapagos are

The Beak of the Finch: A Story of Evolution in Our Time
by Jonathan Weiner

My Father's Island: A Galapagos Quest by Johanna Angermeyer, Johanna A. Fox *

*these books are out of print but are easily found at www.abe.com